YOU MAKE YOUR HEAD LIKE ‘WE ARE THE WORLD’; SHATTA WALE RECORDS ANOTHER DISS SONG!

<strong>I USED TO TELL MY MOM I’LL BE THE FIRST PERSON TO BRING CELEBRITY STATUS TO MY HOMETOWN; MISS GOLDEN STOOL WINNER 2022</strong>

Aisha Huang, the Chinese Galamsey Queen who was arrested and deported in 2019 has been arrested again by Ghana Police Service for the same crime.

She has been arrested for engaging in Galamsey 3 years after her deportation for the same crime.

Aisha Huang operates a shop where she sells mining equipment to her fellow illegal miners.

She herself also engages in illegal mining despite being arrested and deported from Ghana in 2019.

Apparently, she’s been returned to Ghana for a long time and has been doing some illegal things that got her deported

Aisha Huang returned to Ghana via the Togo border and even managed to get a Ghana card with the name Huang En.

Do You Think Ghanaians can Change Their Mind out of money to make their nation better again? 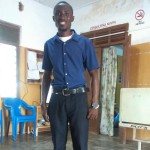 YOU MAKE YOUR HEAD LIKE ‘WE ARE THE WORLD’; SHATTA WALE RECORDS ANOTHER DISS SONG!